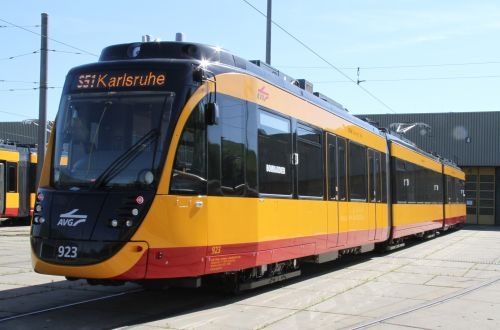 Delivery of the vehicles will run from September 2017 to March 2018. The new tram-trains will replace older vehicles in the AVG fleet which AVG had considering refurbishing, but rejected because at a cost €0.5m per vehicle represented poor value for money considering their limited life.

The 37m-long three-section tram-trains are 2.65m wide and can accommodate 244 passengers. The vehicles are designed for step-free access and are equipped with air-conditioning and toilets. They will also be prepared for the installation of WiFi.

The original fleet of 30 dual-system tram-trains was ordered from Bombardier in September 2009 with an option for 45 additional vehicles.

In March, AVG exercised an option with a consortium of Vossloh Kiepe and Stadler Rail Valencia for a further for 25 CityLink NET 2012 tram-trains, which will expand its fleet of these vehicles to 75.