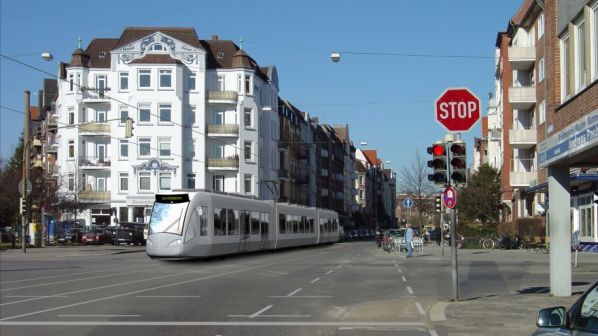 This follows a two-year review of options including bus rapid transit (BRT). If funding is agreed, the new light rail network could be in operation by 2030.

Kiel had previously considered light rail options including tram-trains and a new 1435mm-gauge network to replace the city’s 1100mm-gauge tram system which closed in May 1985. The track was subsequently lifted.

However, consideration of light rail proposals ended in 2015 amidst political disagreement.

Public opinion has historically been divided, as it has in other German cities such as Wiesbaden, Tübingen and Aachen which have all rejected light rail schemes in local referenda.

Some objectors cite the disruption that construction would cause, as well as loss of trees and noise issues. Proponents point to the environmental benefits of electrically-powered light rail and the availability of substantial federal funding that could meet up to 75% of capital costs.

Before the feasibility studies commenced in Kiel, all major political parties signed up to a planning process that would consider all options and agreed to follow the professional advice that resulted from the studies.

The proposed light rail option has a cost:benefit ratio of 1.47 whilst BRT was assessed at only 1.10. BRT would also cost €6m a year more to operate than light rail.

Kiel has set ambitious modal shift goals as part of its climate protection plans which call for private car use to fall from 38% of journeys in the city to 25% by 2035. The new light rail system is key to delivering this.

The light rail project may attract as much as €500m in federal funding plus additional support from the state of Schleswig-Holstein, but BRT would not attract the same level of funding.

Kiel city council will now undertake a major public information and consultation process to finalise the routes of its proposed network as part of the formal planning process.