LOS Angeles County Metropolitan Transportation Authority (LACMTA) opened a $US 1bn 18.5km extension to the Gold Line light rail line on March 5 which also marked the entry into service of the first of a fleet of 21 LRVs supplied by Kinkisharyo. 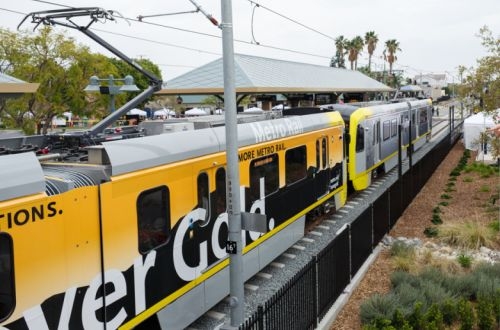 The extension runs east from East Pasadena along the San Gabriel Valley to Azusa and adds six stations to the network. Unfortunately, the opening was marred the following day when a truck crashed into the Gold Line damaging the track and catenary, forcing rail services to be suspended between Arcadia, the first station on the extension, and Allen. LACMTA hopes to be able to restore services on March 7.

LACMTA gave Kinkisharyo notice to proceed to construct the LRV in August 2012, which means it took 43 months from concept to revenue service which it describes as unprecedented. "We appreciated the extraordinary lengths to which Kinkisharyo has gone to ensure the success of this opening," says Mr Phillip Washington, CEO of LACMTA.

The Buy-America-compliant LRVs were manufactured at Kinkisharyo's new plant in Palmdale, California, using Japanese and US components, and form part of a long-term contract to supply 235 cars.

The P3010 cars will also be used on the Expo Line when the final 10.6km $US 1.5bn extension opens from Culver City to Santa Monica on May 20. The extension has seven stations.