LEIPZIG City Transport (LVB) has awarded Solaris a framework contract for the supply of up to 41 Tramino LRVs for the city's 1458mm-gauge light rail network. 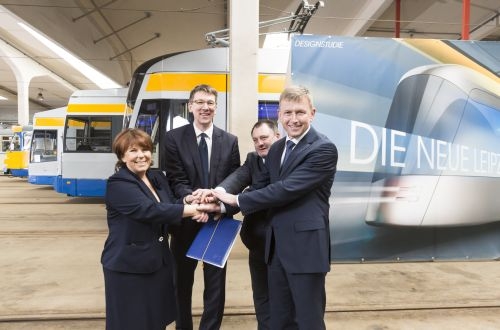 The deal includes a firm order for five LRVs and options to purchase up to 36 additional sets in four tranches of no less than five and no more than 16 vehicles. Delivery will start in 2016 and conclude in 2020.

The new Traminos will replace existing Tatra high-floor trams which have been in use in Leipzig since the late 1960s. LVB is aiming to replace 10 of these vehicles every year for the next four or five years and anticipates that one new LRV will replace two of these trams.

The Traminos will be 2.3m wide and 45m long and the step-free interior will be at least 65% low-floor. A single vehicle will have capacity for 220 passengers with a special area dedicated for people with disabilities.

The Free State of Saxony is providing 50% of the funding for the LRVs, with one third of the components including HVAC and electronic components set to be sourced from companies in central Germany while assembly will take place in Poland. The new LRVs are intended to meet the needs of Leipzig's growing population, which has expanded by 60,000 inhabitants since 2012 to over 550,000 inhabitants.

"As Leipzig is constantly growing, public transport is becoming an increasingly significant matter," says Leipzig mayor Mr Uwe Albrecht. "Continuous investment in attractive and comfortable city transport is the only chance to fulfill the requirements of such a dynamic and important European trade centre as Leipzig. With the new purchase for trams we are taking another big step in this area."