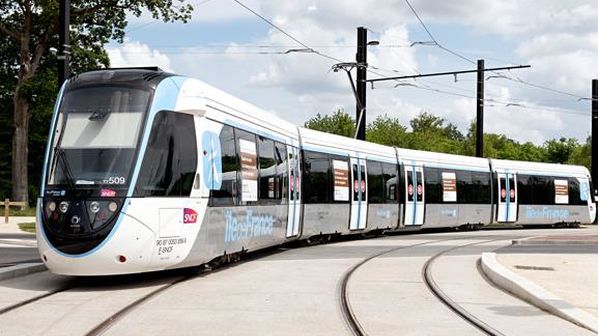 PARIS’ light rail line T13 entered service on July 6, connecting Saint-Cyr with Saint-Germain-en-Laye in the western suburbs and serving 12 stations, seven of which are new.

The new route runs for 18.8km from Saint-Cyr, also served by RER Line C and French National Railways (SNCF) commuter services, to Saint-Germain-en-Laye where interchange is provided with RER Line A by means of a new 190m passageway equipped with travelators.

The project has involved the construction of a new station at Saint-Cyr and a new alignment electrified at 750V dc between Lisière Pereire and Saint-Germain-en-Laye with two new stations.

The remaining 15.5km is a section of the Grande Ceinture, the outer belt line around Paris, which has been upgraded by SNCF Réseau for tram-train operations including electrification at 25kV ac.

Five existing stations on the railway have been refurbished, with platform lengths reduced to 42m to match the tram-train vehicles and the height reduced by 320mm to provide level boarding. Accessibility has been improved by replacing footbridges with pedestrian level crossings.

The new route is expected to carry 21,000 passengers a day, providing an environmentally-friendly and accessible alternative to the private car.

T13 is operated with a fleet of 11 Alstom Dualis LRVs, ordered by regional transport authority Ile-de-France Mobility at a cost of €68.8m. Each LRV can accommodate 250 passengers, with seats for 90, and is equipped with 10 screens displaying real-time passenger information and 36 USB ports.

The fleet is maintained at a new depot covering 6500m2 at Versailles-Matelots, built by SNCF Voyageurs, equipped with a 120m workshop building that houses a wheel lathe. The T13 control centre is also located here.

The new route is operated by Transkeo T13, a joint venture between Keolis (51%) and SNCF (49%). There are 45 drivers trained to operate on the French national rail network.

Infrastructure works for T13 have cost a total of €306.7m, provided by the French government (17%), the Ile-de-France region (53%) and the department of Yvelines which the new route serves.

For detailed data on French projects, subscribe to IRJ Pro.