THE first of eight 42.1m-long Variobahn low-floor LRVs being supplied by Stadler Pankow for the light rail network in Bergen arrived at the Norwegian city's port on October 19. 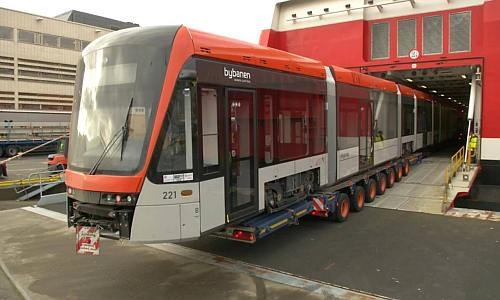 The seven-section bidirectional trams will accommodate up to 278 passengers, 111 of them seated, compared with 212 passengers (including 98 seated) on the existing 32.2m five-section vehicles.

The additional vehicles were ordered in 2013 as part of a contract worth more than €100m which also includes maintenance of the existing fleet of 20 Variobahns until 2026.

Bergen's tram fleet is being expanded in readiness for the opening of the extension from Lagunen to Flesland Airport.