OVERNIGHT testing of LRVs on the Canberra Metro light rail line has been ramped up with a view to achieving the scheduled opening at the end of 2018. 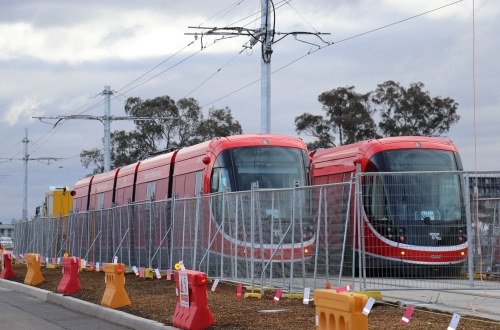 The initial 12km line in the Australian Capital Territory (Act) will link the northern town centre of Gungahlin with Canberra city centre and will have 13 stops. Overhead wires for the 750V dc system have been energised and seven of the 14 CAF-built Urbos 3 LRVs to operate the network have been delivered.

Overnight testing of the first LRVs commenced between Nullarbor Avenue and Gungahlin Place, allowing construction works to continue during the day along other sections of the light rail corridor. In the coming weeks testing will be extended across the full length of the route.

This first stage of the project is being delivered through a public-private partnership between the Act government and the Canberra Metro consortium, which includes construction and operation of stage one of the network for 20 years. Planning continues on a proposed stage two extension of the line from the city south to the suburb of Woden.