ARTIST's impressions of the CAF Urbos low-floor LRV for the first light rail line in Luxembourg were unveiled on July 1 by the country's minister for sustainable development and transport François Bausch and mayor of Luxembourg Mrs Lydie Polfer. 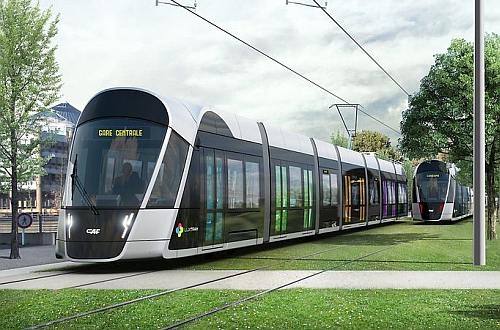 Luxtram, the public company responsible for developing the project, selected CAF as preferred bidder in May for a €83m contract to supply 21 45m-long bidirectional vehicles, the first of which will be delivered in early 2017. Each seven-section LRV will have eight double doors on each side and will accommodate up to 450 passengers.

The vehicles have been styled by Lyon-based agency Avant-Première, which has also worked on rolling stock design for the Riyadh metro and the light rail network in Nice.

Construction is expected to begin later this year on Line 1, which will link the city's main station and Place de l'Étoile in the city centre with the LuxExpo exhibition centre in the district of Kirchberg. The 14-station line will include a catenary-free section through the city centre.

The initial 6.4km section between LuxExpo and Pont Rouge is due to open in the second half of 2017.