THE prefect of the French department of Maine-et-Loire Mrs Béatrice Abollivier has signed a decree authorising the construction of a second light rail line in the city of Angers. 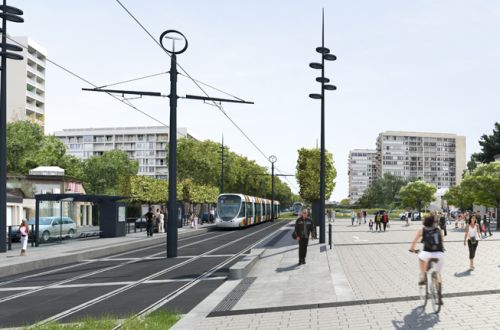 A Declaration of Public Works for Line B was signed on February 20 following more than three years of studies and public consultation.

In February 2016 Angers Loire Metropolitan Council voted to push back the start of construction on the €245m project amid concerns over financing, although public consultation continued according to the previous schedule. This means construction will begin no earlier than 2019, with the project due for completion in 2022.

The 9.9km line will begin in Belle-Beille in the west of the city, running along Avenue Patton into the city centre, where it will briefly share tracks with Line A before turning east along Avenue Montaigne. From here it will turn north onto Boulevard de Deux Croix and Boulevard Alloneau to reach the eastern terminus at Monplaisir.

The project will include a short link between Line B on Avenue Montaigne and Moliére station on Line A, creating a light rail loop in the city centre, together with the expansion of the existing Line A depot.

Line B will have 19 stations, including three with park-and-ride facilities, and will bring another 50,000 residents within 500m of a tram station. Services will be operated by a fleet of 18 30m-long low-floor LRVs, each accommodating up to 210 passengers.