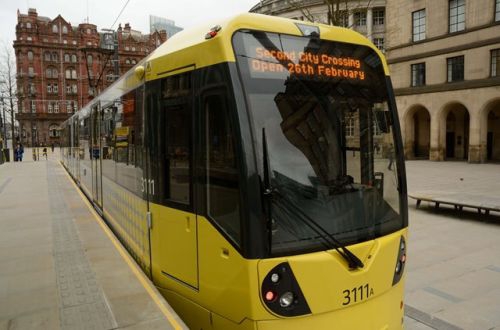 The 1.3km line runs from Lower Mosely Street through St Peter’s Square, continuing through the city centre along Princess Street, Cross Street and Corporation Street before re-joining the existing line to Bury and Rochdale south of Victoria station. The project included the construction of new platforms at St Peter’s Square and a new station at Exchange Square. Deansgate Castlefield and Victoria stations have also been expanded to increase capacity.

The northern section from Exchange Square to Victoria opened in December 2015, but the completion of the loop means more services can now operate through the centre of Manchester. The new line will enable the operation of a six-minute interval daytime service between Shaw & Compton, Oldham and Exchange Square. Manchester Airport services will now run into the city centre and will be extended to Victoria later this year.

Implementation of the £165m project has been accelerated with the aid of a £10.8m grant from the European Regional Development Fund.

The completion of the extension takes the Metrolink network to 97km with 93 stations.