The section extends the line south to Curepipe station. 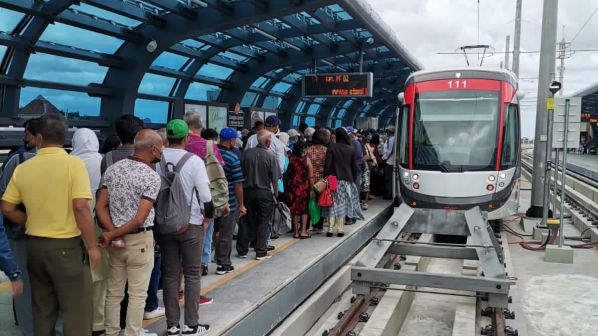 THE next stage of the light rail line on the Indian Ocean island of Mauritius has been completed with the opening of the 6.5km Phase 2C, which extends the line from Phoenix to Curepipe. The section was opened by Mauritius’ prime minister, Mr Pravind Jugnauth, on October 9.

Phase 1, which runs for 12.4km from Victoria in Port Louis to Rose Hill, began commercial operation on January 10 2020 after months of testing with passengers. The 2.6km Phase 2A from Rose Hill to Quatre Bornes opened on June 20 2021, with the 3.6km Phase 2B to Curepipe opening on May 8. Phase 3, a branch from Rose Hill to Réduit, is expected to be completed before the end of this year.

In March 2017 the Indian government agreed to fully finance the project through a $US 275m grant to the Mauritian government and a line of credit to the State Bank of Mauritius. The same month Rites was appointed consultant and project supervisor, while Systra acted as detailed design consultant.

Phase 1 was also constructed by L&T under a Rs 18.8bn ($US 572m) contract awarded in August 2017, with a contract to construct Phase 2A awarded to the company in February 2021. In December 2017, L&T awarded CAF a €100m turnkey contract to supply 18 low-floor LRVs, signalling, an automatic vehicle location system, a traffic light priority system, depot equipment, and a driving simulator. Elis Infotech Systems, China, supplied the smartcard ticketing system.