WEST MIDLANDS transport authority Centro announced on August 14 that its new £40m fleet of CAF Urbos LRVs will be introduced on the Midland Metro on September 5, when the first four vehicles will enter passenger service on the 20km line from Birmingham City Centre to Wolverhampton. 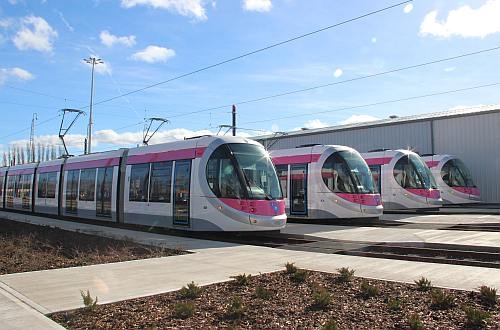 The 20 five-section low-floor vehicles will replace the fleet of 16 AnsaldoBreda T69 trams supplied for the opening of the line in 1999, allowing frequencies to be increased and providing additional capacity for the 1.4km extension from Birmingham Snow Hill to New Street station, which is due to open in 2015.

The vehicles are being assembled at CAF's Zaragoza plant in Spain and are being delivered to Midland Metro's Wednesbury depot at a rate of one unit per month.

Each Urbos vehicle accommodates 210 passengers, compared with 156 on the T69. Centro says that the introduction of the new LRVs and operation of 10 services per hour per direction will increase capacity by 40%, easing overcrowding during peak periods.

Centro also announced on August 14 that preliminary works have begun on a further 1.3km extension from Birmingham New Street to Centenary Square. The £90m project is being funded through the British government's Local Growth Fund and Local Enterprise Partnerships in the West Midlands and is the first phase of the extension to Five Ways and Edgbaston.