AFTER months of delays and dispute, the contract to supply low-floor LRVs to the Hungarian city of Miskolc has finally been signed. A joint-venture of Ganz, Hungary, and Škoda Transportation will deliver 31 bi-directional type 25T vehicles in a deal worth almost Euros 70m. 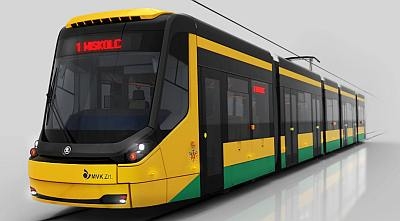 The contract includes options for 10 years' maintenance of the fleet and 10 additional LRVs. European Union sources have provided around 76% of the finance required for the new fleet.
Developed from Skoda's ForCity design, the 32m-long five-section air-conditioned vehicles will accommodate 300 passengers and seat 56.
The tendering for new LRVs in Miskolc has been a protracted process, and this is the fourth time bids have been invited. In May 2010, inconsistencies were found in AnsaldoBreda's winning bid, which was subsequently annulled by the Hungarian public tendering body (KDb). A further call for tenders in Autumn 2010 was cancelled by the KDb before a winner could be announced after CAF disputed the method used to calculate the percentage of low-floor required. CAF and AnsaldoBreda also submitted a complaint to the KDb against the most recent tender, but the appeal was rejected and the contract was signed with Ganz-Škoda on February 15.
Categories: Europe, Light Rail, News
Tags: EU, Hungary, Miskolc, Skoda