A life-size mock-up of the fleet of LRVs being built by CAF for LuxTram was put on show on December 7 in Luxembourg. The mock-up will remain on view until January 31. 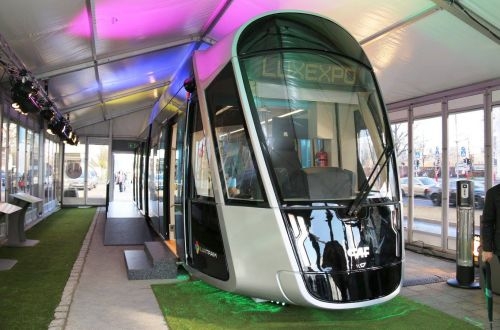 Mock-up of the first LRV for Luxembourg.

The mock-up was unveiled by Luxembourg's minister of sustainable development and infrastructure, Mr François Bausch, the mayor of the city of Luxembourg, Mrs Lydie Polfer, the first deputy mayor Mrs Sam Tanson, and a delegation from CAF.

The 11-tonne mock-up is 15m long, about one third the length of the production vehicle, and is 3.6m high and 2.65m wide. The mock-up will be used to finalise the design in particular regarding passenger accessibility, the interior layout, the ergonomics of the cab, and technical equipment.

CAF received an €83m order for 21 high-capacity LRVs in May this year. The vehicles will operate without catenary on a 3.6km section in the city centre.

Construction of the initial 6.4km section will start in early 2016. This will link the city's main station and Place de l'Étoile in the city centre with the LuxExpo exhibition centre in the district of Kirchberg. The first LRV is due to be delivered at the beginning of 2017 in order to start testing, and the line is expected to open in the second half of 2017.