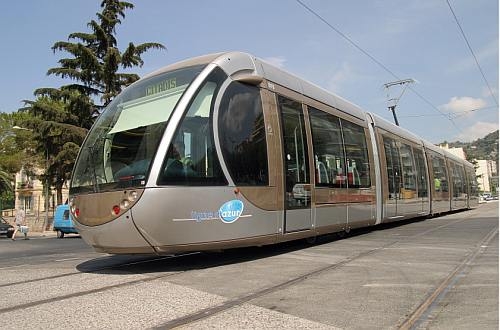 The 44m-long vehicles will accommodate up to 300 passengers and will be equipped with Alstom's SRS static ground-based charging system, which is capable of delivering 1.1MW of charge, or 1500 amps at 750V dc to an onboard bank of capacitors in a 20-second charging cycle.

The vehicles will be designed and assembled at Alstom's La Rochelle plant and deliveries will begin in mid-2017 with entry into service scheduled for 2018. the contract includes options for up to 18 additional vehicles.

The 11.3km Line T2 will link Airport Terminal 2 and Nikaia Administrative Centre in the west with Port de Nice in the east. In order to minimise the impact of construction in the city centre and offer shorter journey times, a 3.2km section of the route in central Nice will be in tunnel with four underground stations. The surface sections of the route will be entirely catenary-free.

The line will have 20 stations and is initially expected to carry 104,000 passengers per day, increasing to 140,000 in the medium term. The journey time between the airport and Jean Médicin in the city centre will be 26 minutes with trams operating at three-minute headways at peak times.

A fleet of 19 44m-long low-floor LRVs will be procured for Line T2, each capable of accommodating up to 300 passengers.

The €650m project is fully funded, with €52.8m coming from the French government, €50m from the Alpes-Maritimes General Council, €26m from the Provence-Alpes-Côte d'Azur regional government, and up to €12.6m from the airport operator. French bank Caisse de Dépôts is providing a €250m loan.