Existing CAF fleet will be equipped with batteries. 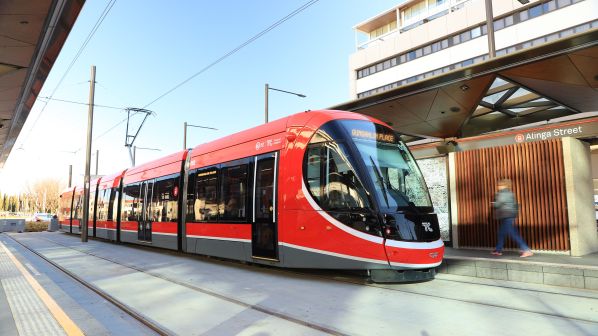 THE Canberra Metro consortium has been awarded a contract to supply five additional LRVs for the light rail network in the Australian capital, which will be equipped with batteries to operate on new extensions that will be built without overhead wires.

Stage 2A will run for 1.7km south from the current terminus at Alinga Street to Commonwealth Park, passing through the Parliamentary Triangle area of the city centre.

Bounded by Kings, Commonwealth and Constitution avenues, the Parliamentary Triangle is a ceremonial precinct that contains Australia’s high court, national gallery and library, as well as its current and former federal parliament buildings.

Canberra Metro consortium member CAF is to supply five new LRVs which will be progressively delivered from 2024, enabling operation to continue as the existing fleet of 14 Urbos 3 LRVs is withdrawn from service to be retrofitted with traction batteries.

This retrofit work is included in the contract, together with extending the LRV depot at Mitchell to accommodate the larger fleet. Depot work is expected to be completed in mid-2024 before the new vehicles arrive.

The future Stage 2B extension of the Canberra network to Woden will also feature catenary-free operation.

The federal government and the Australian Capital Territory (ACT) are jointly funding the contract.

ACT minister for transport and city services, Mr Chris Steel, says the joint contract with the federal government was a “critical milestone” for the delivery of the light rail extension.

“We need to order new LRVs now, and upgrade our existing fleet and depot, to ensure we have enough vehicles manufactured, delivered, tested and ready to start services to Commonwealth Park when construction of the track is completed,” Steel says.

The light rail network has been built and operated by Canberra Metro under a public-private partnership with ACT. Canberra Metro also comprises Pacific Partnerships (sponsor and equity funding), CPB Contractors (design and construction) and UGL (operations and maintenance).