FOLLOWING an international tender, Munich Transport (MVG) confirmed on September 15 that it has selected Siemens as preferred for a contract to supply 22 low-floor LRVs with options for up to 124 additional vehicles. 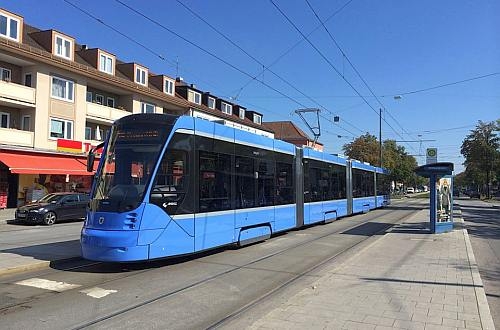 The initial order is worth around €70m including spare parts and will comprise nine two-section, nine three-section, and four four-section Avenio vehicles. The two and three-car LRVs will operate in multiple on weekdays on to form nine 48m-long sets capable of accommodating up to 260 passengers. Deliveries are due to start in mid-2017.

The paired LRVs will operate on lines 20 and 21 and will release Stadler Variobahn vehicles, which accommodate up to 220 passengers. These will be redeployed alongside the four four-section Avenios on lines 16 and 17 where they will increase capacity and enable the withdrawal of 13 of MVG's oldest Type R trams, which date from the 1990s.

"With this order we will significantly increase capacity on the tram network," says MVG CEO Mr Herbert König. "Thirteen older trams with a total of 2028 seats will be replaced by 22 new vehicles with a total of 3208 seats."

The contract, which is due to be signed by the end of the month, includes three options for up to 124 vehicles of various lengths for delivery between 2018 and 2028. If all options are exercised, the total value of the order could reach €300m.

This is the second batch of Avenios ordered by MVG, following an initial tranche of eight four-section vehicles, which entered service on Line 19 last year.