MID-SAXONY Transport Authority (VMS) has awarded Vossloh Kiepe and Vossloh Rail Vehicles a contract to supply four additional City Link tram-trains for use in the Chemnitz area after the state of Saxony agreed to fund 75% of the €23.7m order. 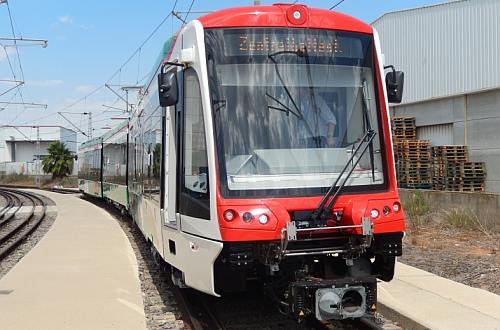 VMS placed an initial order in 2012 for eight 37m-long 100km/h tram-trains for the first stage of the network, which encompasses lines from Chemnitz to Burgstädt, Hainichen, and Mittweida. The bi-mode vehicles will operate under 600/750V dc electric power on tram lines in the city centre and in diesel mode on heavy-rail lines.

The first vehicles are now undergoing tests at the Vossloh Rail Vehicles plant at Albuixech near Valencia in Spain and deliveries to Germany are due to begin next month. The fleet will enter service in December.

The second batch will be delivered by October 2017 for phase 2 of the network, the line from Chemnitz to Thalheim and Aue.

The third stage of the project will involve extending tram-train services to the Chemnitz - Niederwiesa line, while the Limbach - Oberfrohna and Stollberg - Oelsnitz lines will also be converted in the longer-term, taking the total length of the netwok to 226km.