Moscow to trial driverless trams within a year 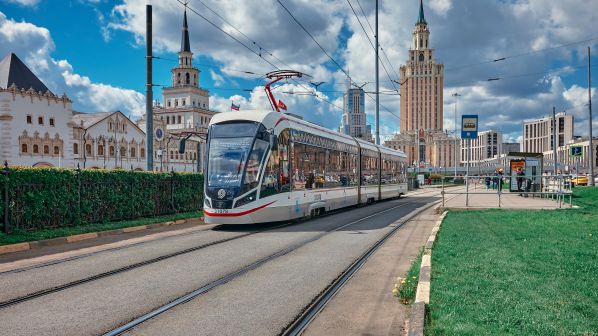 80% of the tram network runs on dedicated infrastructure segregated from other modes.
Photo Credit: Shutterstock/Aleksei Golovanov

MOSCOW plans to begin testing autonomous trams at the end of 2022 or the start of 2023, according to the deputy mayor of Moscow for transport, Mr Maksim Liksutov, who says the required legislation is already in place.

Speaking at the Robots in the City: The Future of Megacities with Autonomous Transport conferenced held by the Noôdome thinktank, Liksutov said Moscow was working to ensure driverless transport could be implemented as soon as possible.

“The government of Moscow supports modern Russian-made driverless technologies,” he says. “We believe in their future, but it is a matter of 10-15 years. It will be great if safe and reliable technologies come sooner.”

Moscow is working with Yandex to test the driverless tram system, initially in depots, then on the network at night, and finally with passengers onboard. 80% of the tram network runs on dedicated infrastructure segregated from other modes.

There are also plans to introduce automation on the Moscow Central Circle (MCC) commuter line, as Russian Railways (RZD) plans to reduce headways to less than three minutes.  Official demonstrations of a Lastochka EMU operating at GoA 3 on the MCC took place last month, a key step towards the start of commercial operation of the train at GoA 3 on the MCC later this year.

“In Moscow Metro, the headway of trains during rush hour is 80-90 seconds,” Liksutov says. “There is yet no company in Russia that can offer a solution to ensure such headways in driverless mode. We know that developments are underway, and we are very interested in them.”