ALSTOM has carried out an initial test run on the 2km line T2 of Algeria’s Mostaganem Tramway light rail project, between the line’s secondary storage park and Mostaganem mainline station. 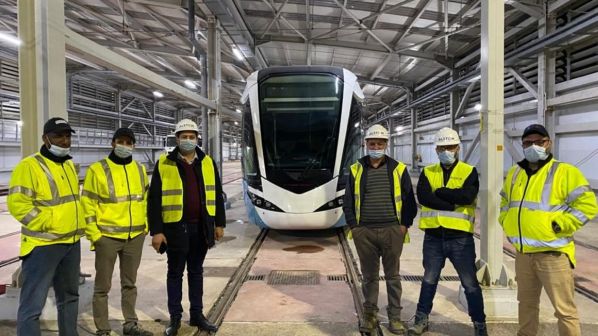 “We are pleased to have achieved this significant milestone despite the various delays as well as the Covid-19 pandemic,” says Mr Amar Chouaki, managing director for Alstom Algeria. “The next steps will be the rigorous dynamic tests to ensure smooth running and guarantee maximum safety for both passengers and the operator.”

The 14.5km Mostaganem Tramway project consists of two lines with 24 stations, totalling 14km of track. The north-south Line T1 will connect Salamander Place in the north to the University of Kharouba in the south, serving 19 stations. The east-west Line T2 will connect the city’s mainline station in the east, where it will interchange with T1, to Avenue Abane Ramdane bus station in the west, serving five stations.

Work on the 14.5km two-line network began in August 2013 and was initially carried out by a consortium of Alstom and Isolux Corsán, Spain, under a €240m contract awarded by the Algiers Metro Company (EMA), which is managing the project.

Construction was initially scheduled for completion by May 2015, but was delayed due to flooding, subsidence and Isolux Corsán’s severe financial difficulties. Work was subsequently restarted through a consortium of Alstom and the Cosider Group, Algeria, with regular operation now expected to begin this year.

The network will be operated using a fleet of 25 Citadis 402 43.9m-long LRVs, which will be manufactured by Cital, a joint venture of Alstom, EMA, and Ferrovial, Spain, at its site in Annaba.