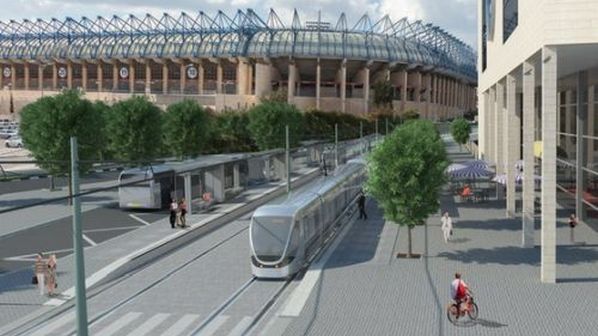 J-Net consortium was awarded a contract to build and operate the 20.6km-long Green Line.

THE TransJerusalem J-Net consortium of CAF and Shapir commenced a 15-year concession to operate and expand the Jerusalem light rail network on April 16, replacing the CityPass consortium.

CityPass has been owned by local investors after Alstom and Transdev sold their stakes in 2015. CityPass agreed to sell its future concession rights plus the fleet of Alstom Citadis LRVs, along with the maintenance depot and control centre, to the Israeli government in February 2020 for Shekels 1.6bn ($US 491.2m).

The TransJerusalem J-Net consortium was awarded a €1.8bn contract in August 2019 to undertake an extension to the Jerusalem light rail network, which included building and operating the 20.6km-long Green Line, and a 6.8km extension to the 14km-long Red Line opened by CityPass in 2011.

CAF is supplying 114 Urbos LRVs for the new Green Line, and will refurbish the 46 Alstom Citadis LRVs used on the Red Line. CAF is also responsible for signalling, communications and power supplies for the new sections of line.

Meanwhile, CAF has selected GMV, Spain, to supply the automatic vehicle location system (AVLS) and depot management system (DMS) for the Jerusalem light-rail expansion projects, which it is currently leading.

GMV’s AVLS and DMS solutions will include modules fitted to all the vehicles, and touchscreens in vehicle cabs, which can communicate with external sensors and the system’s control centre. The fleet management system will provide vehicle location tracking capabilities and allow drivers and passengers to communicate with the control centre, as well as manage depot operation and plan vehicle stabling.