HANNOVERIANS had their first opportunity to sample the city's new type TW 3000 light rail vehicles on March 8, when two of the trams carried a total of 3200 passengers on free demonstration trips between Main Station and Allerweg in the city centre. 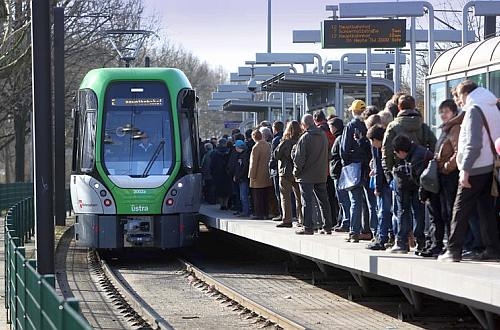 Hannover Transport Authority (Üstra) ordered 50 of the high-floor bi-directional vehicles in 2011 from a consortium of Vossloh Kiepe and Alstom at a cost of €126m, and last November it exercised an option for a further 50 LRVs. The contract includes a second option for an additional 46 units.

The TW 3000s are due to enter revenue service later this month on lines 3 and 7, and will allow Üstra to begin replacing its fleet of 30-year-old TW 6000 trams. Unlike older vehicles, the TW 3000s do not have folding steps, meaning they can only be used on routes with high platforms.