New Helsinki tram to be tested in Germany

IRJ at InnoTrans 2014: Transtech, Finland, is displaying the second of two pre-series Artic low-floor LRVs for Helsinki City Transport (HKL) this week, before sending the metre-gauge vehicle for trials in the German city of Würzburg. 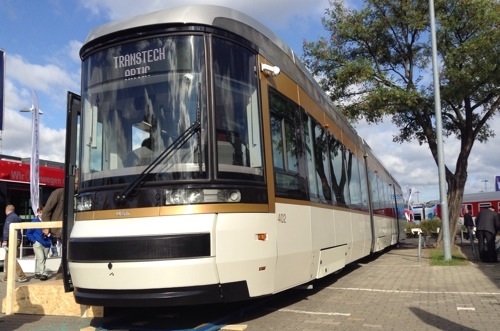 The first prototype vehicle was delivered to Helsinki last year and has undergone an extensive programme of tests covering all of the city's trams lines.

HKL has ordered 40 Artics with an option for 90 additional units and the first series vehicle is due to be delivered to Helsinki next autumn. The LRVs will be assembled at Transtech's Otanmäki plant and HKL expects to receive the new trams at a rate of 10 units per year. Transtech will provide maintenance support for the first three years.

Unlike low-floor LRVs currently in service in Helsinki, the new vehicles will feature pivoting bogies with standard axles and three-stage suspension. HKL says this offers better ride quality, and reduced wheel and track wear compared with low-floor vehicles currently in use in the city."Because we had problems in the past, bogies were a key consideration in the design," says HKL head of development Mr Ollipekka Heikkilä.

The Helsinki Artic accommodates up to 209 passengers, 88 of them seated.

The vehicles are equipped with an intelligent braking energy management system, which allows braking energy to be stored in specially-designed onboard heat exchangers for use in the heating system if it cannot be fed back to the grid via the overhead catenary.

The LRVs are also able to automatically prevent excessive horizontal acceleration in curves by measuring the offset angle between the bogie and the vehicle to determine the curve radius. If the vehicle is travelling too fast, a control device automatically limits the speed, minimising centrifugal forces.