TRIAL passenger operation began on the first phase of the Danhai light rail network in New Taipei on December 24 with a month of free rides on the 7.3km Green Mountain Line. 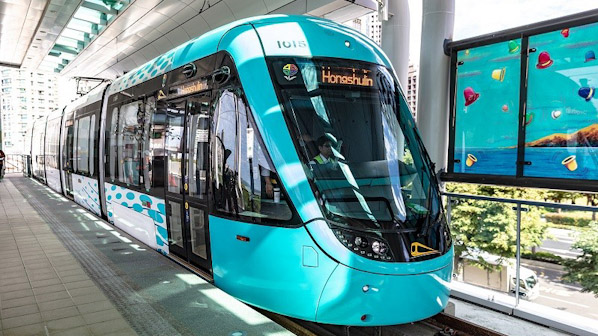 The 11-station line connects Hongshulin station on the Taipei Metro Red Line with Danhai New Township.
During the initial phase of operations trams are running at 15-minute headways between 06.30 and 22.00.
Services are operated by a fleet of 15 Warrior trams built by Taiwan Rolling Stock Company (TRSC).
The LRVs, which are the first modern light rail vehicles to be built in Taiwan, were developed for TRSC by Voith Engineering Services at its Competence Centre for Rail Vehicle Development in Chemnitz, Germany.
Each 34.5m-long five-section bidirectional vehicle accommodates 265 passengers and has a maximum speed of 70km/h.
A three-station branch to Danshui Fisherman’s Wharf, which will be known as the Blue Ocean Line, is due to open next year.