Line 5 will run for 5km from Saint-Eloi to Clapiers. 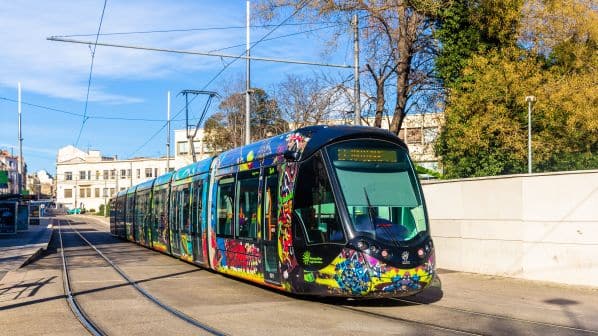 Line 5 will run for 5km from Saint-Eloi on Line 1 to Clapiers, serving eight new stops.

Lots 1 and 2 of the infrastructure contract have been awarded to NGE subsidiaries Guintoli and EHTP, covering surface work.

Guintoli and EHTP previously undertook utility diversion and other preliminary work for Line 5, which began in 2020 and was completed earlier this year.

Lot 3 of the infrastructure contract is currently out tender.

The tracklaying contract for Line 5 has been awarded to a consortium led by NGE subsidiary TSO that also includes Guintoli, Alstom, Spie Batignolles, Malet and NGE subsidiary Agilis.

Work to lay double track over 5km will include a total of 1.9km on concrete bearers and 2.1km on a floating slab to keep operational noise under 20dB.

There will be two crossovers, including a double crossover at the terminus of Line 5 at Clapiers, as well as nine sets of points at the junction with Line 1.

Line 1 will be closed for 13 weeks next summer to enable the connection with Line 5 to be installed at Saint-Éloi.

The contract also covers the supply of track elements for the rolling stock maintenance facility at Les Hirondelles.

TSO says that particular care will be taken to minimise the environmental impact of the project, including the use of low-carbon concrete and the recycling of materials removed during construction to reduce the need for lorry movements and quarrying new materials.

Work site lighting will be limited and the construction schedule will be tailored to avoid disturbing the resident bat population, particularly during hibernation and the mating season.

The egg-laying areas of dragon flies will be protected by specific signposting.