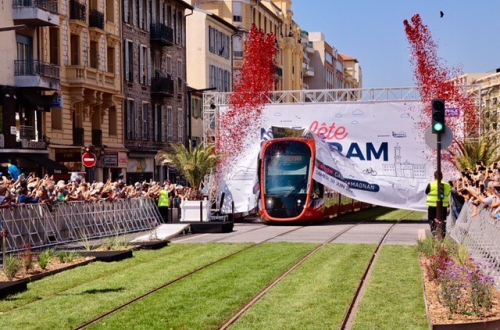 The SRS ground-based static charging technology is coupled with the Citadis Ecopack energy storage system, which allows the LRV to operate without catenary.

SRS automatically charges the LRV in less than 20 seconds while it is stopped at a station. Electricity is stored in the onboard Citadis Ecopack devices, giving the vehicle autonomy between two charging points.

The 44m-long LRV, designed by Ora Ïto, has 40% window surface, LED lighting, large seats, travel information screens and improved accessibility with double-doors along the length of the vehicle.

Alstom says passenger capacity has been increased by 10%, with a 20% increase in boarding and alighting speed at stations and a reduction of over 20% in preventive maintenance costs.

“The Nice tram will also be the first connected tram as of spring 2019 with a tram-to-ground Wi-Fi communication system,” says president of Alstom France Mr Jean-Baptiste Eyméoud.