A full-size mock up of the Alstom Citadis X05 LRV for the second tram line in Nice went on public display in Place Garibaldi on October 1. 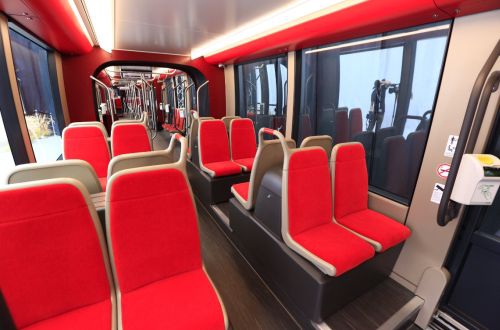 The final design of the vehicle, which was styled by Nice-based designer Ora Ïto, was selected following a poll of nearly 15,000 local residents, with 44% choosing the so-called “modèle ocre” look.

Nice Côte dAzur Metropolitan Council awarded Alstom a €91m contract in October 2015 to supply 19 LRVs for the 11.3km line, which will connect Airport Terminal 2 and Nikaia Administrative Centre in the west with Port de Nice in the east.

The Citadis X05 will have 40% more glazing than the Citadis vehicles in service on Line T1 and will have 10% more capacity than their predecessors.

The mock-up will be on public display until October 30.