THE mayor of Nice Mr Christian Estrosi has confirmed that the French city plans to complete the first phase of its second light rail line by 2017. 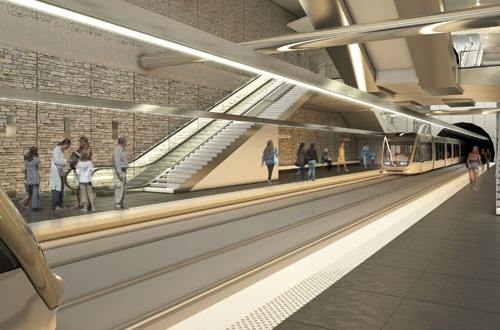 The 11.3km Line T2 will link Airport Terminal 2 and Nikaia Administrative Centre in the west with Jean Médicin in the city centre. In order to minimise the impact of construction in the city centre and offer shorter journey times, the eastern end of the line will be in tunnel with underground stations at Alsace Lorraine and Jean Médicin, which will be an interchange with Line 1.

Around 210,000 people live or work within 500m of the 17 stations, and the line is expected to carry around 80,000 passengers per day. The journey time between the airport and Jean Médicin will be 26 minutes.

The €650m project is fully funded, with €52.8m coming from the French government, €50m from the Alpes-Maritimes General Council, €26m from the Provence-Alpes-Côte d'Azur regional government, and up to €12.6m from the airport operator.

Preliminary construction will begin at the end of this year, and excavation of the access shafts to the underground stations will begin in mid-2014. Commissioning of the first phase is scheduled for late 2017.

The second phase will extend the underground section east beyond Jean Médicin to Durabdy and Garibaldi, and is expected to open in 2020.