Nuremberg plans tender for up to 85 LRVs

NUREMBERG Transport Company (VAG) has received two modern LRVs on loan from Munich and Krakow as it prepares to launch a tender for up to 85 new vehicles. 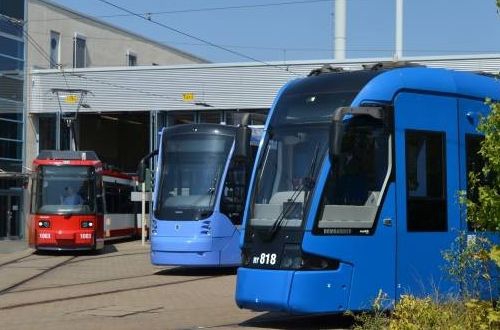 VAG says it needs additional LRVs to accommodate increasing ridership and expansion of the network. The operator plans to launch a tender by the end of the year, subject to the confirmation of financial support from the German federal government and the state of Bavaria. The latter could cover up to 40% of the cost of the initial order for 12 vehicles through a fund for reducing air pollution, but deliveries would need to be completed by the end of 2022.

VAG says the remaining 73 vehicles would be delivered by 2034.

As it prepares for the launch of tenders, VAG has taken two vehicles on loan for two weeks to evaluate different options for the new fleet. Krakow Transport Authority (MPK) has provided a 70% low-floor Bombardier Flexity Classic LRV, while Munich Transport Company (MVG) has provided a 100% low-floor Siemens Avenio T1.

VAG says the LRVs will enable it to discuss options for the fleet both internally and with external stakeholders including the passenger advisory council and organisations for people with reduced mobility.

VAG says it has also held preliminary discussions with various manufacturers ahead of the tender.

At 2.40m, the Flexity Classic is 10cm too wide to operate on the Nuremberg tram network, and running will therefore be restricted to the test track at Heinrich Alfes Strasse depot. However, the Avenio will be used in service between Gibitzendorf and Dutzendteich, where passengers will be invited to sample the vehicle free-of-charge.