Odense light rail line to open on May 28

The network was handed over to Odense Letbane on April 26. 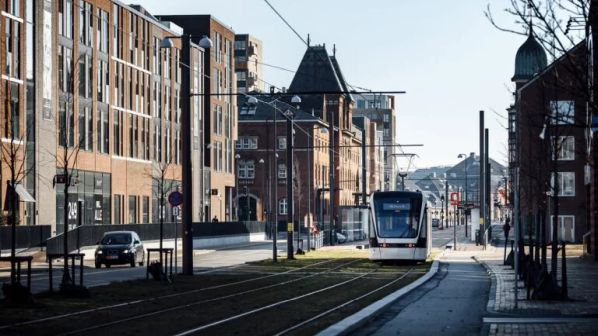 The line is due to open on May 28.
Photo Credit: Lasse Olsson

THE 14.5km Odense light rail line, which will run from Tarup Centre via the city centre to Hjallese, is due to open on May 28 after Comsa handed over the infrastructure to Odense Letbane, the public agency implementing the project, on April 26. The final three safety approvals for the line were also received on the same day.

Comsa was awarded a railway systems contract for the line in May 2017, including track, electrification, telecommunications, Scada, signalling, a control and maintenance centre, and stations. Stadler was selected for a contract to supply 14 Variobahn low-floor LRVs for the line, with this later increased to 16.

Construction began in April 2018, with the line originally due to open at the end of 2020 before being delayed several times due to construction and approval delays. Keolis was awarded a 15-year operations and maintenance contract worth €230m in December 2018.

The final track section for the project were laid on April 28 2021, with test operation along the full line beginning on December 16 2021.

The line has 26 stations and will offer an end-to-end journey time of 42 minutes. Services will initially be free for a week following the opening of the line.

Keolis took over as operator and infrastructure manager of the line on April 27 on behalf of Odense Letbane, which is fully owned by the city of Odense. As part of the hand-over agreement, Comsa is continuing minor works including tiling work, technical adjustments and the reinstatement of grass beside the line.

“Keolis is now taking over responsibility for the light rail line in Odense and will start the final operational testing of rails, trains and signals,” says Keolis Danmark light rail director, Mr Thomas Brændstrup. “In concrete terms, this means that from April 27 light rail trains will run in Odense every day from morning to evening according to the same timetable as when the line enters final operation, but without passengers.”

“Both the present and the future call for efficient transport solutions in large cities, and I have no doubt that light rail has the potential to support the impressive urban development that Odense is experiencing, and which will continue for many decades to come,” says Odense Letbane chairman, Mr Jesper Rasmussen. “The journey up to now has not been without bumps in the road. We regret that we have experienced delays. But now is the time to look ahead. And I would like to personally thank all the partners in the project who have made an outstanding effort across the board to meet the target of opening on May 28 - a date we have been jointly aiming for since the beginning of the year.”

Two proposals have been put forward for stage 2 of the project. The first would run 9.2km from Seden via Vollsmose to Vesterbro/Sukkerkogeriet, while the second would run 11.7km from Seden to Odense Zoo. Both proposals would use part of the first stage, creating an “H” shaped network.