IRJ at InnoTrans 2014: OMNITRAM, a low-floor LRV developed by a joint venture of German bogie supplier Transtec F&E Vetschau and Electron, Ukraine, makes its first appearance at InnoTrans this week. 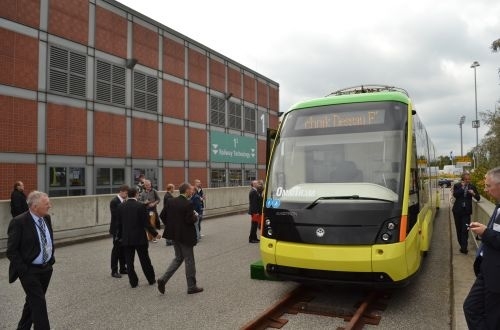 The 30.2m-long metre-gauge five-section vehicle on display is one of two pre-series OmniTrams delivered last year to the Ukrainian city of Lviv, where it operates on routes with a minimum curve radius of 50m.

The unidirectional OmniTram is being offered in a range of configurations from a three-section 19.5m vehicle accommodating up to 105 passengers (46 seated) to a seven-section 40.9m LRV, which accommodates up to 215 passengers (86 seated).

TransTec is producing the bogies for the OmniTram range while Electron is responsible for electrical and mecahnical components and bodyshells.

Transtec says it is looking for potential customers in central and Eastern Europe as well as Germany.