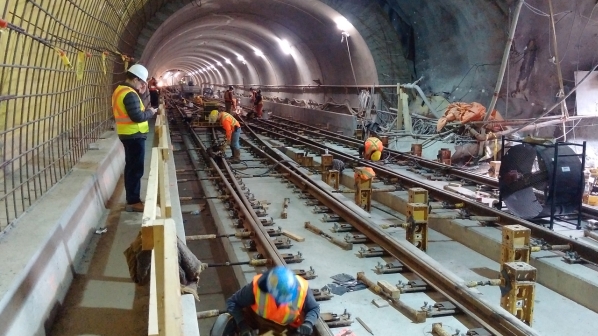 Construction on the 12.5km line, the largest-ever public works project in Canada’s capital, began in 2013. It is mainly above ground, with a 1.5km tunnel section through the city centre. The 13-station line will run from Tunney’s Pasture in the west to Blair in the east.

The route mainly follows a former busway, part of which was constructed on an abandoned Canadian Pacific Railway alignment. Rideau Transit Group is building the line, with major partners including ACS Infrastructure Canada, Ellis-Don and SNC-Lavalin.

A sinkhole that opened in June 2016 on a city centre street above the tunnel contributed to the delay by several months while significant work is still required to complete the underground Rideau Station. However, all trackwork and overhead catenary wire has been installed between the terminals, and vehicle testing with Alstom LRVs, which are equipped with CBTC, is under way.

Another problem confronting OC Transpo is that a major restructuring of the city’s bus system, based on the LRT route, was implemented early on September 2 for reasons that are unclear. General Manager Manconi has promised to have his staff review the route changes.