THE Norwegian capital Oslo unveiled the first of its new fleet of 87 low-floor Urbos 100 LRVs during a virtual event broadcast from the city’s Grefsen depot on October 12. 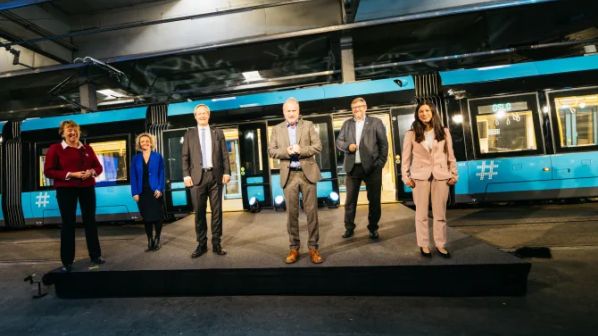 The vehicles, which are designated SL18 by operator Sporveien, were ordered from Spanish manufacturer CAF under a €200m contract awarded in June 2018. The contract includes an option for an additional 60 vehicles.

The first of the 34m-long, five-car LRVs will begin operating on the network from next year, and the entire SL18 fleet is expected to be in service by 2024. The new SL18s will replace 72 LRVs operated on the network, which will be phased out gradually.

The new LRVs have a capacity of 220 passengers, and are equipped with six doorways for easy boarding, compared with the previous standard of four doors. In addition, the vehicles feature four dedicated wheelchair spaces each, as well as USB ports for portable devices.

“With the new trams we are doubling capacity from 50 to 100 million passengers,” says Ms Lan Marie Berg, councillor for the environment and transport for Oslo City Council. “The service offered in Oslo is now among the best in Europe, and fits perfectly into a car-free city lifestyle.”

“The biggest improvement is that we can finally offer tram rides to everyone, regardless of whether you are in a wheelchair or have a stroller or bicycle with you,” says Mr Bernt Reitan Jenssen, CEO of Ruter, Oslo’s public transport authority.

The new fleet is part of a broader overhaul of the city’s light rail network being carried out by Sporveien, in collaboration with Oslo City Council’s Urban Environment Office and Ruter. Other improvements include the modernisation of track infrastructure and depots, as well as upgrades to adjacent public spaces and streets.