WARSAW Tramways has taken delivery of the first of 30 type 134N Jazz low-floor LRVs from Pesa, which will be used on lower-density routes in the city. 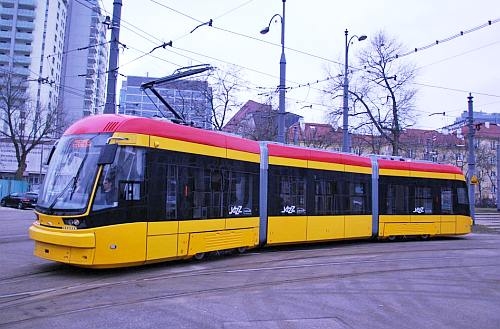 The 19.3m-long three-section vehicles will accommodate up to 132 passengers, seating 27.

The LRVs are fitted with an onboard energy storage system and two units will be specially adapted for driver training.

The first vehicle is now undergoing trials with Poland's Institute of Rail Vehicles.

The LRVs were ordered last January in a Zlotys 167.9m ($US 43m) deal, which was co-financed by the European Union Cohesion Fund through the Operational Programme Infrastructure and Environment.

Since 2007, Warsaw Tramways has acquired 321 new LRVs, including 186 Swing vehicles from Pesa, and with the delivery of the latest batch of Pesa vehicles, 60% of the fleet will be low-floor.