A prototype low-floor tram developed by Pragoimex, Czech Republic, began trial operation with passengers on the Prague tram network on February 1, when the vehicle entered service with the city's public transport operator DPP. 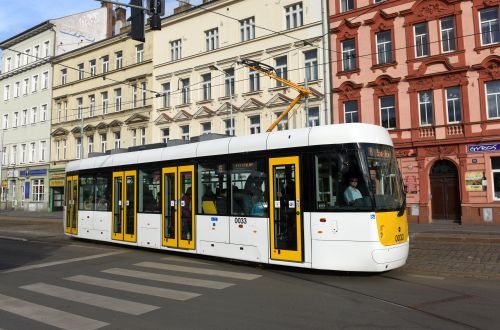 The unidirectional EV01 is just 15.1m long but has three sets of double-leaf doors and one single-leaf door on one side the vehicle. The tram accommodates up to 110 passengers, 30 of them seated.

The prototype vehicle, which has been named Evičká, had already undergone trials on the Prague network during 2015 in order to gain certification for passenger operation, a process which involved running 5000km without passengers, as well as braking and noise and vibration testing.

The EV01 is now operating daily on routes where only single-vehicle operation of non-articulated trams is permitted. On weekdays the vehicle is used on Line 6 from Spořilov to Smíchovské nádraží, operating on Line 5 on Saturdays and Line 7 on Sundays. Trial operations are due to continue until August.

The EV01 has been developed by Pragoimex with the support of Aliance TW Team, Krnov Repair and Machinery Workshops, VKV Praha, and assembled at one of DPP's workshops in Prague.

Pragoimex is looking for other Czech tram operators which might be interested in trialling the demonstrator vehicle. DPP reportedly has no plans to buy single-unit non-articulated vehicles.