THE CITY of Ottawa announced on December 5 that it will recommend the Rideau Transit Group consortium as preferred bidder for the contract to design, build, finance, and maintain the city's first modern light rail line, which will be named the Confederation Line. 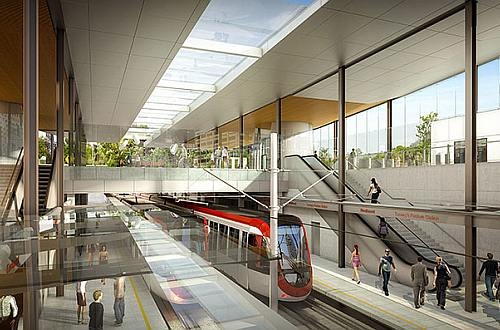 The western terminus of the Confederation Line at Tunney's Pasture.
Photo Credit: City of Ottawa

The consortium, including ACS Infrastructure Canada, Dragados, SNC-Lavalin, EllisDon, Veolia, and Alstom, has submitted a $C2.1bn ($US 2.1bn) fixed-price bid for the project, which involves building a 12.5km line from Tunney's Pasture in the west of the city to Blair in the east, with a 2.5km tunnel beneath the city centre. The line will have 13 stations, three of them underground, and services will operate at minimum headways of 1min 45sec with an end-to-end journey time of 24 minutes.

Alstom will supply a fleet 30 Citadis low-floor LRVs which will be 49m-long and accommodate up to 300 passengers. The vehicles will be maintained at a purpose-built depot at Belfast Road, which will create 100 jobs.

Subject to approval by the council, the $C2.1bn fixed-price contract is due to be signed in February. Construction will be completed in October 2017 and commercial services are expected to start in May 2018. The line will initially have capacity for 10,700 passengers per direction per hour, although this could increase to 18,000 passengers per hour per direction by 2031 if an option for 25 additional LRVs is exercised.