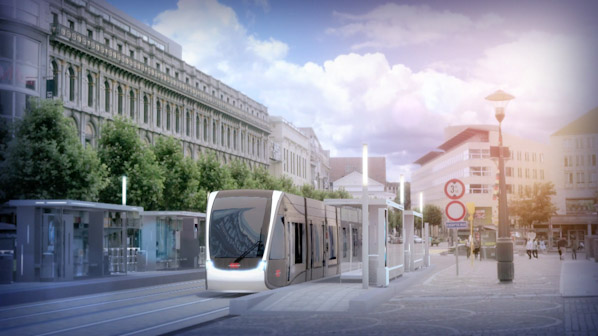 In December 2014, Wallonia Regional Transport (SWRT) awarded MobiLiège, a consortium of Alstom, BAM PPP PGGM and DG Infra, a design-finance-build-maintain (DFBM) contract for a 12.5km line from Standard Liège stadium in the west to Liège-Guillemins station and Coronmeuse in the city centre, with a short branch crossing the river Meuse to serve Bressoux station.
However, in early 2015 Eurostat, the European Union’s supervisory body for accounting standards, raised concerns over the structure of the PPP concession and work on the project was suspended. Eurostat decreed that the €380m investment in the project should be classified as public funding and placed immediately on the government’s balance sheet. The Wallonian government rejected this and opted to retender the concession with a revised structure, cancelling its contract with MobiLiège.
Three consortia were shortlisted in the revised tender, which was launched by Walloon Regional Transport (SRWT) in 2016, but the Skoda-Vinci-CFE-Meridiam consortium withdrew from the competition in July 2017. This left just Tram’Ardent and MobiLiège 2.0, a consortium of Alstom and BAM PPP PGGM to submit initial bids in September 2017.
Both bidders were subsequently invited to submit best and final offers in May 2018.
OTW expects to sign the contract before the end of the year and the line is due to be commissioned in 2022.
CAF’s share of the contract includes the supply of 20 low-floor LRVs, signalling, telecommunications and power systems in addition to system maintenance.