THE general director of Wallonia Regional Transport (SRWT) Mr Jean-Marc Vandenbroucke announced on December 10 that Mobiliège, a consortium led by Alstom and construction group BAM, has been selected as preferred bidder for a PPP contract to design, build, operate, and maintain the first modern light rail line in the Belgian city of Liège. 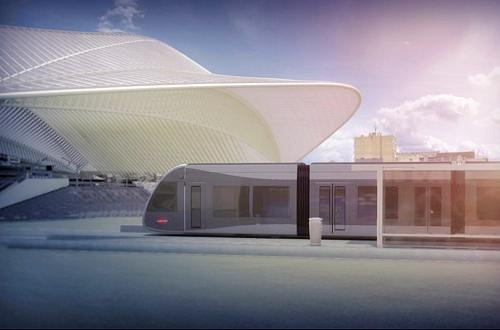 Two shortlisted bidders, Mobiliège and LegiaExpress (Bombardier and Vinci) submitted best and final offers for the project on September 15. SWRT will now begin final negotiations with the preferred bidder but it says LegiaExpress will remain in reserve until talks with Mobiliège conclude. The 30.5 year contract, which includes a 3.5-year construction period and a 27-year operating term, is due to be signed in the second quarter of next year with the aim of commissioning the line in the second half of 2018.

The initial phase of the project involves construction of a 12.5km line with 21 stations following the north bank of the river Meuse from the Standard Liège stadium in the west to Liège-Guillemins station and Coronmeuse in the city centre, with a short branch crossing the river to serve Bressoux station. In the longer term, the line will be extended west to Jemeppe Bus Station and northeast to Herstal, giving a total length of 18.9km.

Services will be operated by a fleet of 45m-long low-floor LRVs, which will accommodate up to 300 passengers. Initially the line will have capacity to carry up to 3900 passengers per hour per direction (pphpd) with provision to increase this to 6000 pphpd.