THE city council in the Bavarian city of Regensburg has voted overwhelmingly to back plans for the construction of a light rail network. 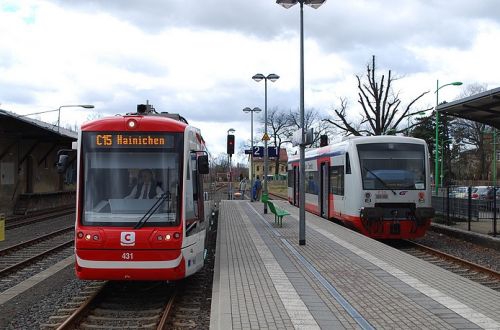 Proposals for a tram-train network in the Regensburg area take their lead from the system in Chemnitz.
Photo Credit: Keith Fender

The council’s decision means that detailed planning work will now be commissioned and work to secure funding from both the German federal and Bavarian state budgets will begin. Assuming formal adoption of the plans by the state and national authorities in 2020, detailed route planning will start in 2021 with construction starting in 2025. The two-line network is expected to open in 2027.

The proposed routes will serve suburban railway stations on both sides of the city as well as the city's main station, with a shared north-south section in the city centre.

A metre-gauge tram network operated in Regensburg between 1903 and 1964, and the return of trams to the city’s streets was first mooted as early as 1967.

On July 3, the mayor of Regensburg, Mr Jürgen Huber, joined fellow county council leaders in from the surrounding towns of Schwandorf, Neumarkt, Kelheim and Cham, representing a catchment area of around 700,000 people, in calling for a connection between the tram system and the main line rail network.

This would use bi-mode tram-trains, taking a lead from the so-called Chemnitz Model adopted in Saxony. The resulting network, envisaged as an S-Bahn, would offer cross-city services with a minimum half-hourly frequency.

If adopted, regional rail services tendered by Bavarian Railway Company (BEG), and currently operated by Agilis and DB Regio, would be partially replaced by tram-trains.

The current light rail proposals backed by Regensburg city council do not include the necessary links to the national network and the differing objectives of the city and surrounding areas will likely need to be reconciled before any funding from either the Bavarian state or German federal budgets is agreed.