FOLLOWING approval of the investment case and a decision to proceed with construction by Frankfurt am Main transit authority planning company RTW in late November, work is now underway to obtain planning permission for the new Regionaltangente West tram-train network with the aim of starting operation in 2026. 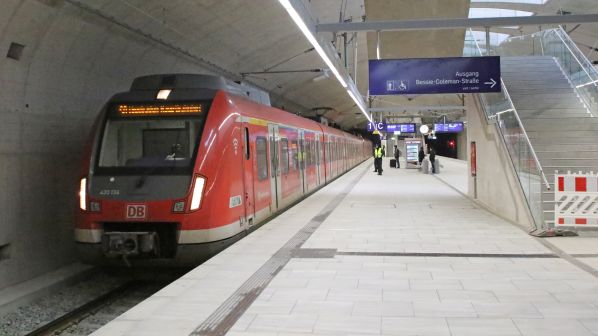 The tram-train network will use the new S-Bahn line and station at Gateway Gardens, which opened near Frankfurt International Airport on December 15, and is a key part of Rhine-Main Transport Association’s (RMV) plans to improve connections from the airport and its surrounding businesses to the wider Frankfurt area.

While RMV wants to avoid adding to the already very heavy S-Bahn and regional and long-distance rail traffic routed via the city centre, the new network will use existing heavy rail S-Bahn lines wherever possible to reduce costs. New light rail infrastructure will connect the existing lines with the network set to have 26 stations, 12 of which are already in use for S-Bahn services.

The plan envisages that the core of the new network will use the existing S-Bahn line from Bad Homburg to the Eschborn area where it will head west on new light rail alignments, via Frankfurt Höchst and the road bridge over the river Main, joining the heavy rail line just west of Frankfurt Airport. It will then serve the airports’s regional station and the new station at Gateway Gardens, proceeding on DB Networks lines via Frankfurt Stadium as far as Neu-Isenburg from where a new light rail line east to the suburb of Birkengewann is planned.

In the north tram-train services to and from the Bad Soden S-Bahn branch are planned, joining the new light rail section after Höchst. The southern terminus will be at Dreieich-Buchschlag on the existing mainline south of Neu-Isenburg towards Darmstadt.

RMV anticipates that 100,000 passengers per day will use the new Regionaltangente West network. The authority expects to deploy 50m-long tram-trains, possibly working in pairs, which are able to operate on the 15kV ac national railway network and newly constructed 750V dc light rail sections. The tram-trains will be procured by the VDV TramTrain group of operators, which are proponents of the Karlsruhe model.

The project is estimated to cost €1.1bn, plus rolling stock, and will largely be financed by the federal and Hesse state governments through the Municipal Transport Financing Act. The local authority partners in Frankfurt, Bad Homburg, Hochtaunuskreis, Main-Taunus-Kreis, Eschborn, Schwalbach, Bad Soden, Sulzbach, Kreis Offenbach and Neu-Isenburg will pay just under a third of the cost. Frankfurt will contribute €180m.

Planning permission for construction work is required from several local authorities and all outstanding applications will be submitted between March and June 2020. Assuming permission is granted, construction will begin in 2021 and the first tram-trains are due to operate in early 2026.