The Transcarioca and Transoeste BRT lines will be upgraded to light rail over the next 15 years. 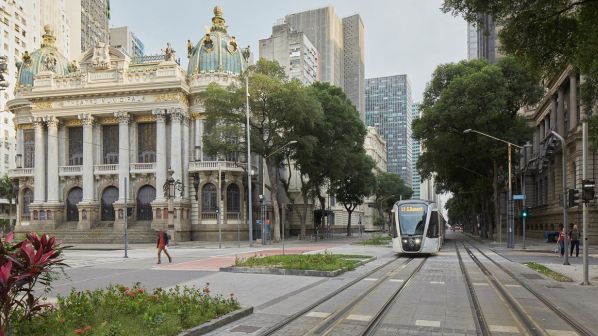 The city’s current network, which was inaugurated for the 2016 Olympic Games in Rio de Janeiro, has three lines with 29 stops, and is served by a fleet of 32 vehicles each with capacity for 420 passengers

The upgrade project will begin with the conversion of the Transcarioca BRT line, connecting Barra da Tijuca with Galeão International Airport, and the Transoeste BRT line, which runs from Barra da Tijuca to Santa Cruz, with a branch to Campo Grande. The BRT network already features dedicated BRT lanes and high-platform stations.

Paes says the conversion to light rail, which will double capacity, will build on the investment already made in the BRT network, with Reais 4.5bn ($US 830.2m) spent on the Transcarioca BRT and Reais 2.5bn spent on the Transoeste BRT.

The project is being led by Rio de Janeiro’s Partnership and Investment Company (CCPar), formerly Cdurp, in partnership with the Municipal Transportation Secretariat (SMTR).

Work will also begin next year on a light rail line from Botafogo station, which is served by metro lines 1 and 2, to Gávea.

“The plan we have presented has three premises,” Paes says. “The first one is that this is not a project for my time in government. We have to learn that investment in infrastructure in a transport network needs to go beyond governments. It is long-term planning in which we will seek external funding. The second premise is that nothing of what was done in the BRT infrastructure is lost. On the contrary, what has been done makes it easier for us to make this plan feasible and viable. This helps to reduce costs. Without the infrastructure already in place, this plan would not be possible.

“The third is that we won’t stop any of the plans already announced for the BRT. We’re not going to stop buying buses and doing the renovations. Everything that is planned for the BRT will be fulfilled in my time in office. We will not wait 15 years to fix the system.”

The Botafogo - Gávea light rail will be implemented through a public-private partnership (PPP), with work beginning in the first half of 2023. The 12km line will have 13 stops, along with an integrated operation and maintenance centre.

“We want to improve the quality of transport for the people of Rio de Janeiro and point the way to the Rio of the future,” says CCPar president, Mr Gustavo Guerrante. “Light rail is a success story here and around the world. It is the transition to a more sustainable Rio, with a mode of transport approved by the population. The latest survey showed an 88% approval rating for the LRT.”

The city will continue to improve the existing BRT corridors while planning for conversion to LRT is underway. The schedule also includes the delivery of major projects such as the completion of the Transbrasil BRT route and the Gentileza interchange; the resurfacing of the Transoeste BRT corridor; and the expansion of the city’s bicycle path network.

The announcement was supported by the Brazilian Railway Industry Association (Abifer). “The news of extending the light rail network in the city of Rio de Janeiro sounded like music to the ears of the Brazilian railway sector,” says Abifer president, Mr Vicente Abate. “This proves the wisdom of having deployed an electric light rail for the 2016 Olympic Games.”

Separately, Alstom has signed a contract for the 700m double-track extension of the existing light rail network to Gentileza, where interchange will be provided with BRT and other bus services.

The contract includes construction of the terminal with four platforms, installation of 1.4km of the APS ground-based electrification system, a rectifier substation and signalling.

For detailed data on rail projects in South America and around the world, subscribe to IRJ Pro.