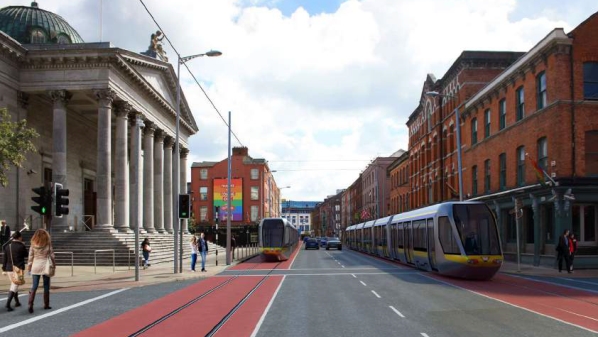 Both Project Ireland 2040 and the National Development Plan (NDP) 2018-2027 make commitments to progressing the scheme to support the ambitious growth projections for Cork city.

Approximately 25 stations will be required along the route, which will have an estimated total journey time of 47 minutes. These stations will serve a catchment area of all existing and proposed key adjoining development areas and provide an interchange with InterCity and suburban rail services at Kent station plus proposed BusConnects services.

A total of 27 LRVs will be required to provide the initial five-minute frequency, which will offer an hourly capacity of 4600 passengers per direction.

The light rail scheme is planned for delivery in the latter part of CMATS. However, the plan says the line should be delivered earlier if it becomes apparent that the appropriate development densities are being achieved sooner than anticipated.

The LRT line will be preceded by a high-frequency bus service between Mahon and Ballincollig.

“Light Rail has proven itself in many cities, including Dublin, and TII is very enthusiastic about working with the NTA and all the regional stakeholders in taking this project forward in Cork,” says TII CEO, Mr Michael Nolan.

“When the NTA met with the elected members of Cork City Council recently, it was clear to us that there was overwhelming support for the measures contained in the Transport Strategy,” says NTA chief executive, Ms Anne Graham. “It was also clear to us that if the strategy is to remain a credible document in the eyes of people in Cork, it is essential that progress is made on the delivery of the key elements, sooner rather than later. That is why today’s announcement is significant, and we believe that it is a clear signal that implementation of the Strategy is now underway.”