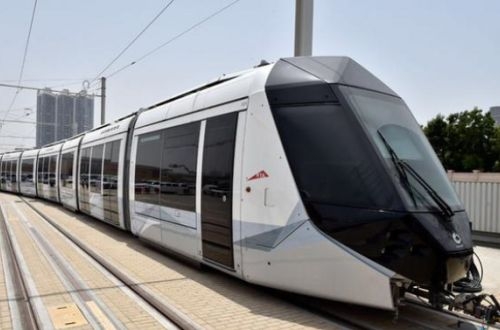 Passenger services will start at 06.30 on November 12 with LRVs running at 10-minute intervals during peak hours and every 12 minutes off-peak.

The initial 10.6km line has 11 stations and runs through the densely populated areas of Al Sufouh, Dubai Marina and Jumeirah Beach Residence. It connects with the Red Line of the metro at Jumeirah Lake Towers and Dubai Marina, and with the Palm monorail at Palm Jumeirah. Most of the line runs at grade along Al Sufouh Road, however there are elevated sections in Dubai Marina.

The light rail line includes several unusual features. All stations and LRVs are air-conditioned and stations have platform-screen doors to cope with temperatures up to 50oC. LRVs have separate sections for passengers travelling in gold and silver class, and to enable women and children to travel separately from men. Some stations have lifts and escalators. The line is equipped throughout with Alstom's APS ground level power collection system to avoid the need for catenary.

Alstom has supplied 11 44m-long Citadis LRVs for the first phase of the project, with a further 14 vehicles set to be delivered for the second phase. Alstom and its partner Coley Besix FM will maintain the rolling stock and fixed installations for 13 years under a €120m contract placed by Dubai's Roads & Transport Authority (RTA) in 2012. There is a €50m option to extend the contract by five years.

The line will be operated by Serco, which already operates the metro, under a 75-month contract awarded by RTA in 2013.