UTAH Transit Authority welcomed the first passengers to its S-Line tram line on December 7, when residents were offered free rides on the line in return for a donation to the city's food bank. 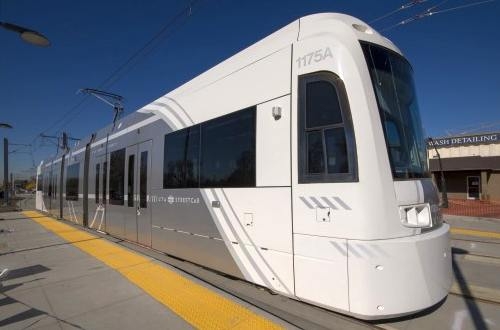 Full commercial services began the following day on the 3.2km line, which runs east from an interchange with the Trax light rail Red, Blue at Green lines at Central Pointe to serve South Salt Lake, Sugarmont, and Fairmont. Services operate at 20-minute intervals using a fleet of Siemens S70 LRVs.

The seven-station line is expected to carry 3000 passengers on an average weekday during its first year of operation, increasing to more than 4000 passengers per day by 2030.

The $US 55.5m project was part-funded by the United States federal government through a $US 26m grant from the Transportation Investment Generating Economic Recovery (Tiger) programme.

To celebrate the opening, UTA is offering a limited promotional $US 1 fare to S-Line passengers who pay electronically, including the UTA Farepay card, bank-issued contactless credit cards, and mobile payment systems such as Isis and Google Wallet.

In the longer term, a second phase is planned which will extend the line east from the McClelland Street terminus in Fairmont to the centre of Sugar House.