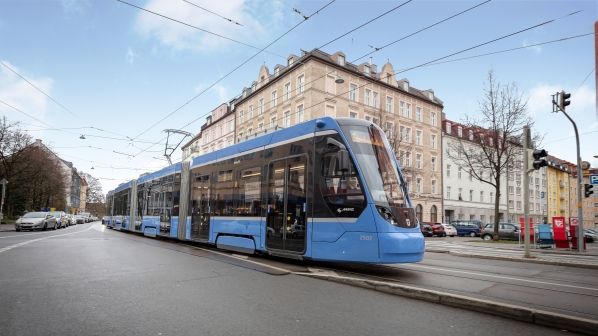 TRIALS by Siemens Mobility and Munich City Authority (SWM) using semiconductor technology based on silicon carbide (SiC) fitted to a three-section Avenio LRV have found the vehicles were quieter and used 10% less energy.

The one-year trial in Munich was completed in August and was conducted as part of the Shift2Rail Pinta project. The LRV covered 65,000km in service.

The aim of the project is to introduce SiC technology in order to reduce life-cycle costs and bolster the rail industry in Europe says Siemens.

During the trial, the SiC semiconductor technology was installed in one of two traction converters on the LRV. The continuous monitoring of energy levels showed an approximate 10% reduction in energy consumption. The measurements also found lower noise levels during operation and an overall reduction in motor noise.

Two of the three project phases have been completed with these being the initial planning stage and the vehicle testing for the SiC converter. The focal point of the trial is the system optimisation created using SiC in dual-system tram-trains.

“One factor plays a key role in the acceptance of LRVs, particularly in terms of new construction projects: our vehicles must be as quiet as possible while in service,” Mr Ingo Wortmann, SWM head of mobility says. “We would be very interested in this solution if these improvements could be commercially mass-produced.” Infineon Technologies produced the semiconductor technology