PUBLIC services began operating on the first phase of the Shanghai Songjiang Tramway network on December 26 with the start of operations on the section of Line T2 from Canghua Road to Zhongchen Road. 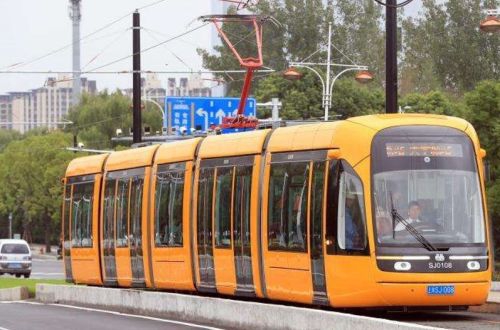 The 13.9km line serves 20 stations, including an interchange with Shanghai metro Line 9 at Songjiang University Town, with a journey time of 46 minutes between the termini. Trams are initially operating at 10-15 minutes headways.
The line will be operated and maintained by a joint venture of Shanghai Shentong Metro Group (51%) and Keolis’ Chinese joint venture, Shanghai Keolis (49%), under a five-year contract awarded earlier this year.
In April 2015, Shanghai Songjiang Tramway Investment and Operation Company awarded a joint venture of Alstom and Shanghai Rail Traffic Equipment Development Company (Satco) a €72m contract to supply 30 Silkworm low-floor LRVs, which are the first in China to be based on Alstom’s Citadis platform.
The five-section bidirectional vehicles are 33m long and 2.65m wide and accommodate up to 300 passengers including 56 seated.
Line T1 from Chenta Road to Xinqiao main line station is due to open next year. Line T2 will become a circular line when the link between Zhongchen Road and Jinxi Road is completed, sharing Line T1 tracks between Jinxi Road and North Sanxin Road.