THE long-awaited Sheffield - Rotherham tram-train pilot, the first in Britain, carried its inaugural passengers on October 25, just over nine years since the project was announced and six-and-a-half years since securing approval from the Department for Transport. 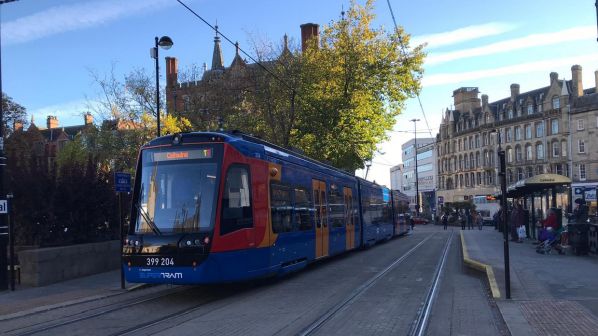 Running from Sheffield Cathedral, the tram-train uses the Sheffield Supertram network to Meadowhall South/Tinsley, before proceeding over a new 160m chord at Tinsley to an upgraded and electrified section of a former freight line to Rotherham Central. The service then continues on the main line to Rotherham Parkgate, which has been electrified at 750V dc for the project.

Seven 37m-long class 399 Stadler CityLink tram-trains will operate the service running at 20-minute intervals throughout the day. The dual-voltage vehicles have been in service on the Supertram network since September 2017.

The project is led by South Yorkshire Passenger Transport Executive (SYPTE) with the backing of Network Rail, the Department for Transport, Northern Rail, and the city’s light rail operator Stagecoach Supertram.

Network Rail installed 11.5 single track-km of 750V dc electrification and one 600kW substation, together with additional signalling and a 200m turnback facility at Rotherham Parkgate for the project. The infrastructure improvements were initially expected to cost £18.7m while the pilot was expected to get underway in 2015. However, design issues relating to the link between the light rail and heavy rail networks led to the delay and to cost increases, initially to £58m and now £75m at the project’s conclusion.

The two-year pilot is expected to inform similar studies of the use of tram-train technology in other British towns and cities.