THE first of 34 Alstom Citadis 402 LRVs for the initial phase of the light rail network in Sidi Bel Abbès arrived in the Algerian city on April 8. 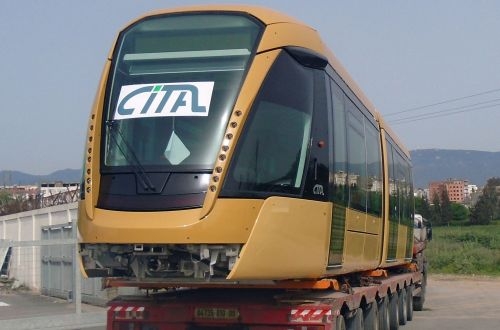 The 43.7m-long vehicles are being assembled by Cital, a joint venture of Alstom, Algiers Metro Company (EMA), Ferrovial, and Algerian National Railways (SNTF), at its facility in Annaba in eastern Algeria.

The 70km/h seven-section vehicles run on four powered bogies and one trailer bogie and accommodate up to 302 passengers.

The LRVs carry a golden-brown livery which is intended to epresent the colour of wheat fields, a symbol of the city.

The initial $US 420m phase of the network comprises two lines totalling 17.8km with 26 stations. The project is being managed by EMA with Yapi Merkezi, Turkey carrying out civil works under a contract awarded in 2013. Commercial services are expected to begin at the end of this year.