SIEMENS presented the first Avenio M LRV for the Germany city of Ulm to the managing director of Stadtwerke Ulm (SWU), Mr André Dillmann, at a ceremony at the company’s tram depot on April 21. 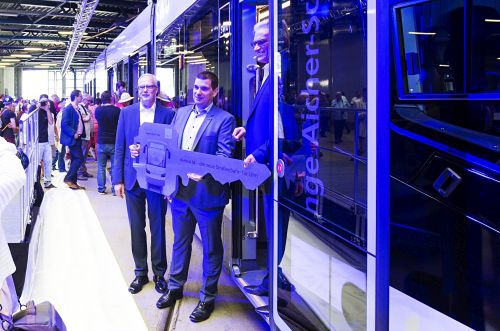 SWU placed a €32m order with Siemens in May 2015 for 12 vehicles to expand its fleet in readiness for the opening of the 10.5km Line 2, which is due to begin operating in December.

The 31.5m-long metre-gauge LRVs will accommodate up to 175 passengers and the order is the first Siemens has received for the multi-articulated version of the Avenio.

Assembly is taking place at Siemens’ Simmering plant in Vienna and four vehicles have been delivered to Ulm so far. SWU says it expects to receive the remaining eight LRVs by September or October.

The first public run - a charity fundraising special - will take place on June 10.