THE first of 16 CAF low-floor LRVs for the 11.9km metre-gauge tramway in St Etienne arrived in the French city on July 1. 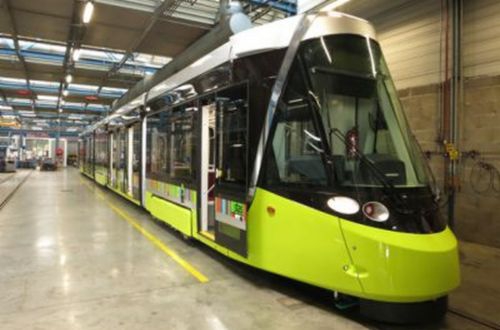 The five-section, low-floor LRVs are based on CAF's Urbos platform but have been specially adapted to St Etienne's metre-gauge network through the use of a 2.15m-wide carbody. Unlike the network's existing vehicles, the CAF LRVs are bidirectional and feature additional doors for greater operational flexibility. Each 35m-long vehicle will accommodate 238 passengers, 34 of them seated.

The trams were styled by Lyon-based design agency Avant Premiére and the vehicles are being assembled by CAF France at Bagnères-de-Bigorre in Hautes-Pyrénées.

One of the vehicles will go on public display at the St Etienne International Fair, which runs from September 23 to October 3, and the fleet will enter commercial service in December.